All women reported some degree of photophobia during PMS migraines.
-Somerville (1972)

During PMS, women care less about other people’s feelings. They are even less accurate when identifying the emotions on people’s faces.
-Derntl (2007)

Women might be inclined during PMS to roll their shoulders inward and hold self-protective postures. However, yoga poses that open the spine and chest, thought to improve the hormonal function of the body, reduce pain for women with bad PMS.
-Rakhshaee (2011) 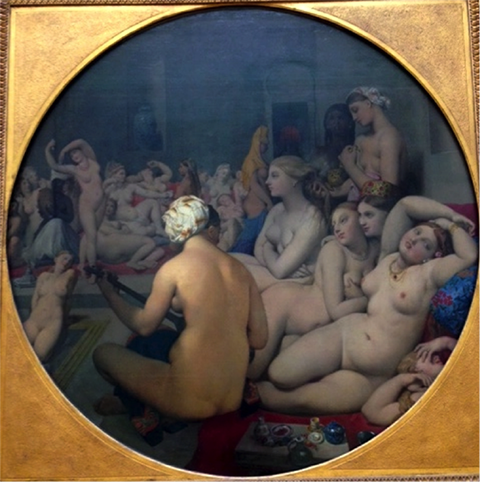 The Turkish Bath
by Ingres

In any room of twenty randomly gathered young women, there will be on average two women undergoing PMS. Can you see them? Hints: look for pulling away from the crowd, evidence of light sensitivity and loud sounds, daytime fatigue. Also: self-enclosing posture, need for personal space, absence of any interest in emotion recognition in others.